I’ve been listening to an addicting podcast that answers many of the questions I’ve always had about what happens to the people I encounter in my law practice who unfortunately get sent to prison. The podcast is called Ear Hustle.  WARNING: Do not tune in unless you have a lot of time to listen, because you’re going to be hooked!  How would I describe it…? 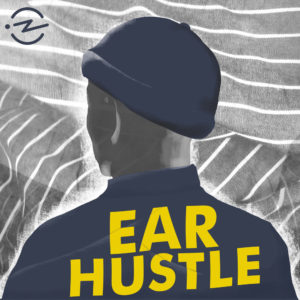 Imagine a four-foot by nine-foot space, something like a small storage unit or closet. Now imagine sharing it as a living space with someone else for a really long time … like the rest of your life. Such is life inside San Quentin State Prison (referred to by its inmates as “the Q.”) according to Ear Hustle’s first episode, “Cellies.” Co-hosted by inmate Earlonne Woods and Nigel Poor, a San Francisco area visual artist, Ear Hustle just wrapped up its second season on June 20 with its 19th episode of internet visits into the lives of state prison inmates at “the Q.”

Recorded on-site at the prison’s media lab, Ear Hustle is sometimes rough, sometimes poignant, sometimes funny and always fascinating. The show’s topics include the exploration of “the SHU” or solitary confinement –“try to remember all of the things you did from 1989 to 2002. Now imagine doing all of them in one small room,” recounts Woods — and the “Boom Boom Room,” where conjugal visits between inmates and their spouses take place. Other episodes explore the LGBT experience behind bars, and how inmates deal with everyday matters like aging and death.

Equipped with a microphone and allowed access to San Quentin’s exercise yard to interview inmates about their prison experiences, Woods, who is serving a sentence of 31 years to life for attempted second degree robbery, covers not only the pre-planned subject matter but is also alert for the unscripted gems he comes across, like his recording of prisoner Scoop Stack’s singing of his prison tune “Worth It.” The music Woods comes across while on the yard has become an unexpected hit for the co-hosts, who dedicated an entire episode to it at the end of Season 1.

Named for the prison-slang term for eavesdropping, Ear Hustle has been well-received by traditional, mainstream media. In 2016, Radiotopia named Ear Hustle the winner of its Podquest contest, choosing it from more than 1500 international entries, and Woods and Poor have been featured on NPR’s All Things Considered and CBS News Sunday Morning.

Sure to be a binge experience, Ear Hustle is well worth a listen. And if you can’t get enough of it after hearing all of its episodes, visit the show’s website www.earhustlesq.com and sign up for its monthly newsletter, The Lowdown. You can also interact with the show on social media via Twitter, Instagram, and Facebook.

Available on the usual apps for your various devices, Ear Hustle will return in September for Season 3.